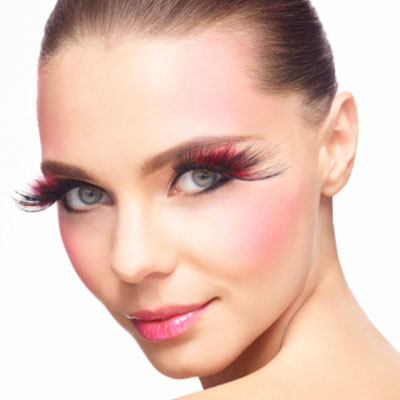 I’m a Louboutin fan (as many of you!!). I was so excited when I heard (you can follow Shu Uemura on Twitter like me : @shuuemura #shuart) that Shu Uemura will mark the opening of Christian Louboutin at the Desigh Exchange this June, with the creation of a unique pair of false eyelashes, exclusively available in Canada and inspired by the theatricality and fantasy of the exhibition!!

The iconic French shoe designer Christian Louboutin (who doesn’t know him?) celebrates the full span of his twenty year career, with a retrospective exhibition showcasing two decades of inspiration and boundary pushing design. Held at the Design Exchange (DX) from June 21 to September 15, 2013, this will be the only Canadian location on the international tour of this exhibition which was first curated by the Design Museum London and Christian Louboutin in 2012.

To mark the launch, Kakuyasu Uchiide, Shu Uemura’s international creative director, designed a limited edition pair of custom false eyelashes inspired by the Christian Louboutin’s exhibit. The art of false eyelashes is one that shu uemura has unquestionably mastered. Exquisitely combed, shu uemura lashes are amongst the most creatively designed and luxuriously expressive eyelashes in the world.

“What inspired me to create the Rouge et Noir lashes is the beautiful form, texture and colors of Christian Louboutin’s creations”, says Kakuyasu Uchiide. “To me, their power to tell a story is both surprising and impressive. With a single shoe, it is possible to easily imagine the story about the woman who wears them”, he continues.

“For this occasion, I explored the similarities between shoe design and lash creation. Just like a shoe, lashes can be a form of incredible fantasy and imagination”, Uchiide explains.

Inspired by the showgirl theme featured in the exhibition, Uchiide designed the Rouge et Noir lashes showcasing black and red in the leading roles. The elegant curve of the sleek black lash takes inspiration from the stiletto heel, while the red feathers create a sensual contrast. “The thing that shoes and make-up have in common is their ability to inspire beauty and fantasy. It was exciting to have the chance to see the story created by the synergy of Louboutin’s designs and my creations, when they are side by side”, Uchiide concludes.

Only 15 pairs of the lashes will be available for the Canadian market, each one numbered and signed by Kakuyasu Uchiide, making them a unique collector’s item.

The lashes will be unveiled in June and auctioned with proceeds from the sale of the lashes donated to the DX in support of the Emerging Designer Competition.

Details about the auction will be revealed in June…