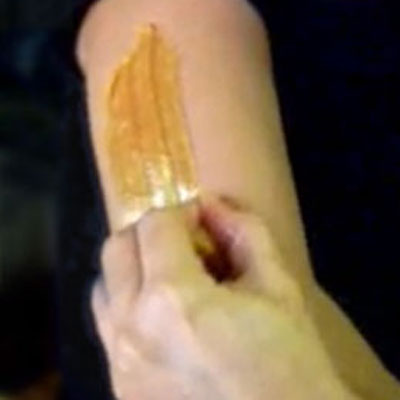 I heard about this technique from an Algerian friend and she gave me her old family recipe. It’s one of the least expensive large-area waxing methods. It’s been used since medieval times and is still used all over the world.

I decided to talk about it today because this ancient method is still in use and it’s gaining in popularity, especially for those who are allergic to the usual depilation products available on the market or those who are on a tight budget. People who like to use natural products will like it too.

You can get ready-made oriental wax but if you want to save money, you can prepare it yourself because you can make it with ingredients found in any kitchen.

And yes, it’s cheap to make and you can also re-use the same mixture several times (the caramel forms a ball that you can stretch and re-use until it’s full of hair). The other advantage is that because it’s made from sugar, you can rinse it off with warm water.

You’ll probably need practice to master the technique because it’s not as simple as regular waxing, but it’s worth exercising your patience!

Put 300 g (1¾ cups) of sugar in a large pot. Add a tablespoon of honey and half a teaspoon of salt. Add water to the ¾ level. Stir the mixture until the sugar is completely dissolved.

Bring to the boil. When it becomes foamy, after about 10 minutes, add the juice of half a lemon. The mixture will become a little frothier. If it looks as though it might boil over, turn down the heat. Let it boil until it turns caramel colour and leaves thick blobs when dropped onto a cold surface (like a plate rinsed in cold water).

Pour the mixture into a home-made water bath (a bowl placed inside another larger bowl with cold water in the bottom. And let it get cold enough to work with your hands.

Knead the product in your hands, stretching it out each time (like a taffy pull), dipping your hands in cold water regularly (it’s normal that it will feel sticky) until you get a doughy but not too thick consistency (water will liquefy the caramel a little). Continue to work the product with your fingers until the caramel changes colour and becomes opaque.

You can do the waxing immediately or keep the oriental wax in a container in the fridge (up to two months), but when you want to use it, you should heat it a little in the microwave to soften it. (Be careful, a few seconds are enough, the wax should still be dough-like and you shouldn’t burn yourself).

It’s important to know that this wax should not have the same runny, melting texture as regular wax. It should stay constantly thick and form a ball in your hand.

Take a piece of caramel in your fingers and form a ball. With your fingers placed in such a way as to form a dome-shape with your hand, spread out the wax pressing down with your fingers on the area where you want to remove the hair and slide your hand in the direction the hairs grow. This will ensure that you spread a thin layer on the skin. Use your thumbs when applying the product to your legs.

Pull off with a sharp rapid movement in the opposite direction of hair growth. The movement must be really sharp to prevent the wax sticking to the skin. This is the most difficult part but practice makes perfect!

Unlike regular wax, you can’t pull off a large section at once. You have to do several small movements to remove the hairs from a large area.
When you’ve done the first section, knead the wax again and do another area. For best results, the wax should remain soft and sticky during the whole process.

Is it painful? Well, it’s about the same as normal waxing and the results are the same too. I found a little video on YouTube which demonstrates the technique (it’s in French unfortunately but the visuals will give you an idea)

Your home-made wax might be thicker than the one you see in the video; if that’s the case, it should be easier.

Another one shows how to cook the wax. It’s not quite the same as my technique and recipe but you can choose the one you prefer.

How about you? Have you ever tried this technique and what do you think of it?